AUTHORS
Amela Hadžimejlić
Amela Hadžimejlić born in 1969 Ljubljana, Slovenia. Graduated at Printmaking Department, in  1993 at Academy of Fine Arts in Sarajevo, University of Sarajevo, Bosnia and Herzegovina. Since 1996. studied and 1998. finished Postgraduate Course of Printmaking at of in . Exhibited  22 solo exhibitions and take part in over 150 international exhibitions abroad, graphic, print biennials and triennials as well as in origin country ( Bosnia and Herzegovina, Croatia, Slovenia, United States, Poland, Italy, Greece, Bulgaria, Romania, France, Germany, Turkey, Sweden, U.K., Belgia, Kuwait, China, Japan, Spain, Hungary, Egypt, She is a Prize winner of several artistic awards. Her art works are included in 19 art, print and ex-libris collections of Museums and Galleries. Since 1996. she is a  member of ULUBiH (Bosnia and Herzegovina Association of Artists).Live in Sarajevo and works as a Professor of Drawing and Printmaking at Printmaking Department, Academy of Fine Arts, University of Sarajevo, Bosnia and Herzegovina. 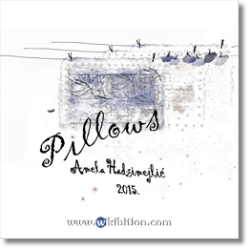 Playfulness on the pillow
"Do not be a philosopher in the text that you write for this exhibition," said Amela Hadžimejlić to me ,the author of graphic pillows that you see in front of you. Even if I were a philosopher, I think, , for which there are some (un) reasonable doubt, I would not be in this case. Because, at the first sight of these artifacts, how nicely it says , you can see something you do not see too often, something that awakens memories of the time and people who have implanted our culture that we have, first unconsciously, and then understanding the world around them, adopted . And maybe we formed some important life decisions and set some through - art and (or) philosophy, anyway - wanting to stay in that sensibility that we brought from our pillows into the world as a kind of amulet, a secret thought that was ( too) serious world we live in,that is the highest possible to some extent, remain a child. That is, to have that playfulness. Because important things in art are however won in the end or at the beginning of the game. – read more>
Solo exhibitions Awards Works in museums and art collections Colective exhtibitions Books published
Solo exhibitions
Awards
Works in museums and art collections Colective exhtibitions
Books published
HOME | ABOUT | GALLERY | POSTEXHIBITION | AUTHORS | CONTACT | General Site Map
Back to content | Back to main menu